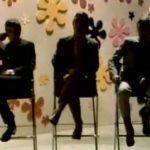 We are, each of us, getting older. Every second of every day. And as we get older things change. I’ve talked at length about how my sister Wendy has found a new life at JH Media, and how even Michael is running Dear Darling now and developing a life of his own. Our family has been so tight knit for so much of our lives that as my siblings and I grow apart, I’m feeling a void of intimacy in my life that I don’t know quite how to deal with. Trying to fill that void with work, clearly, is not the answer. For a while, I’ve been trying to build up the courage to wade into the dating pool, but the concept remains wholly alien to me.

I fear I’ve missed that high school phase experimental phase that most of my peers went through, and I can never go back. That sort of trial and error period where you throw caution to the wind, make your share of mistakes, and set a baseline for the rest of your romantic life. Usually by my age, people have been around the block enough times to have received at least a little positive reinforcement in this area. But now even asking somebody out seems like a bridge too far. What it they say no? I just don’t know if I could take that kind of rejection.

And I must admit that I fail to understand the online dating-hookup culture. In the millennial limbo of protracted adolescence, casual dating seems to be the order of the day. The vast majority of college educated millennials say they’re not planning on settling down anytime soon, and this sometimes leads to us not wanting to put labels on relationships; because 10 years is a long time to be “dating” someone and not get married, at least in the eyes of generations gone by. But I still cling to silly romantic notions like “love at first sight,” and the longer I fail to experience these things, the more I’m forced to consider that there might be something wrong with me. It’s possible I’m such a hopeless romantic precisely because I haven’t had any significant romantic relationships, and my primary frame of reference for these things is pop culture. Also, I had to grow up listening to the fairytale beginning of my parents’ romance, which I still hold up as the relationship standard, even if their marriage isn’t necessarily having a fairytale middle.

It’s also distinctly possible that I’m overthinking this. I do excel at overthinking things. But everyone tells me it’ll happen when I least expect it. That I can’t force these things, and that the greatest relationships present themselves when you’re not even looking. But I have nearly an entire lifetime of not looking under my belt, and that kind of happiness still eludes me. Part of me wonders, “If it was going to happen, wouldn’t it have happened by now?”