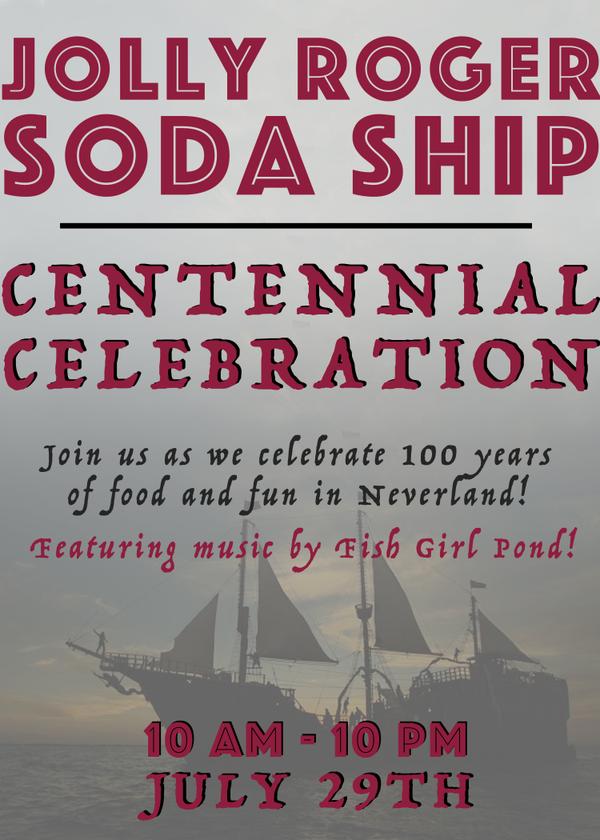 Ten Delicious Decades! As mentioned last week, the Jolly Roger Soda Ship is celebrating its 100th anniversary tomorrow, July 29th. The crew will be hosting an all-day party at the shop with yummy treats and music from Fish Girl Pond. In addition, shop owner Aimée Jolie will be posting an extensive history of the shop, chronicling its decades-long presence in Neverland and it’s ever-evolving role as a gathering place throughout the tumultuous twentieth century in America.

Reality Bites. Since the return of Jas Hook and Wendy Darling to Neverland, some Neverlandians have been tuning into the JHMedia Livestream to learn more about the company (and feed their curiosity about the power couple). Last Thursday those same Neverlandians witnessed a shocking confrontation between Hook and Neverland’s favorite son Peter Pan. Peter came across as, for lack of a better word, a bully. It will be interesting to see how he handles his new notoriousness.  Is the play really the thing?

Get me to the Church… Sarah-Jane Lakewood set a date for her nuptials to fiance Alfie. Neverlandians, mark your calendars for August 15, 2016 in New Orleans, Louisiana. Should be a hot ticket! As in literally very hot. August in Louisiana hot. Lakewood says invitations will be going out soon. Don’t give her honeymoon advice if you want to make the list!

Changes of Heart (and Location). Teresa Delacruz has relocated to New York City with her boyfriend Neal. Though everyone will be sad to see less of her, we wish her the best with her new life. And if you’ve stopped by Neverland Books lately, you’ve probably noticed that Mia Rivers still has not returned to her post. You only have to look so far as her tumblr to find that she’s currently residing at a crossroads between Neverland and Denver.  Though not always an easy thing to do, try to follow your heart where it leads, Mia!

New Sheriff in Town. G. Harrison Lestrade has been offered the job of Neverland’s Deputy Sheriff pending a background check. But, since he comes directly from the FBI, that shouldn’t be a problem! While we’ve had to say goodbye to a couple of Neverlandians, we are excited to welcome him and accountant Wesley Parsons (who’s looking for a roommate!) to the community full time.

Local Blues. Neverlandians were dismayed to read last week’s editorial in which John Darling, assistant to the Editor in Chief, opened up about the Kensington Chronicle’s financial difficulties. As a recent hire, this gossip columnist found the the article especially distressing. However, it’s been encouraging to watch Neverlandians gather around the paper in support. Many citizens have pledged to pick up subscriptions and the Neverland Care Center guaranteed that copies of the Chronicle would always be available in its waiting room. Keep supporting local news!