For Love And Country 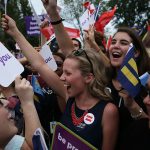 Unless you’ve been living under Skull Rock, by now you know that this past Friday, the United States Supreme Court made a momentous decision; gay marriage is now legal in all 50 states in the union. And words cannot adequately describe how much this means to me. My social media feeds are one solid, unending rainbow… and I’ve never seen anything more beautiful.

This historic decision builds on earlier cases, like Loving v. Virginia, which overturned state bans on interracial marriage, and Undine v. Ohio which granted humans and mermaids the right to enter into civil unions. The Supreme Court finally acknowledged what so many of us have been saying all along, that “the right to marry is a fundamental right inherent in the liberty of the person, and under the Due Process and Equal Protection Clauses of the Fourteenth Amendment couples of the same-sex may not be deprived of that right and that liberty.”

The entire notion that gay marriage was ever somehow distinct from “regular” marriage is a product of a troubling trend that has historically suffused pop culture’s portrayal of gay characters; Far more often than not, gay characters have been defined almost exclusively by their sexuality. We’ve seen countless, angst-ridden coming out stories, which can give rise to the wildly inaccurate assumption that growing up as a gay child is uniformly fraught with internal strife and external condemnation. Which is not to say that these things don’t ever happen, far from it. But I, personally, find it so refreshing when we get to see the other side, when a character’s proclamation of their sexuality is heralded not with a bang but with a whimper. When their loved ones say, “We kind of already knew, but it wouldn’t have mattered even if we didn’t.” Because, more and more, that happens in the real world, too.

There’s a theme that’s been running through my editorials of late, this idea that a proper pairing can form a union so much stronger than the sum of its parts. I know that, historically, there are all sorts of societal reasons why the institution of marriage has stood the test of time that have nothing to do with the lofty idea of true love, but as a person who likes to think of himself as equal parts hopeless and romantic, it still seems to me that in a perfect world, marriage should, in the words of Friday’s Supreme Court decision, “[embody] the highest ideals of love, fidelity, devotion, sacrifice and family.” And it fills me with unrepentant joy that so many perfect unions of the heart will finally be recognized as perfect unions under the law. That children with same-sex parents will no longer have to grow up thinking that their family units are somehow less-than, simply because these two people who fell madly in love with one another happen to be of the same gender.

Members of the National LGBTQ Task Force, huddled about the Supreme Court on Friday, hoisted signs that featured two simple words: “Be you.” I don’t think I’ve seen a more profound and stirring a call to action than that in all of my years on this planet. And I’ll tell you this much, dear readers: I, for my part, intend to keep on being me for as long as my heart keeps beating. Because I don’t know how to be anything else. And I nobody should ever have to.