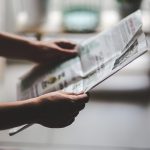 Neverlandians, by now you have no doubt heard that my father, George Darling, is stepping down from his position as editor-in-chief of the Kensington Chronicle. When Father made a deal with Mr. Hook to sell the paper to JH Media, we were assured that he would continue to run the day-to-day operations at the Chronicle, and that the paper would not be substantially changed going forward. But, from what little he’s told me about it, to all appearances my father’s resignation is a matter of creative differences between himself and the new management. That being the case, I can’t help the nagging suspicion that the winds are about to change here at our local paper, and quite possibly not for the better.

Though my father’s separation from his beloved local newspaper appears on the surface to be entirely amicable, the fact of the matter is George Darling is a man of far too much integrity to air his dirty laundry in a public forum. If there is something more contentious underlying his departure, we may likely never know about it. And the whole situation is further complicated by the fact that our new editor-in-chief, Jas Hook himself, is inextricably entangled with the Darling family on a personal level; it’s no secret that he and my sister Wendy have been happily dating since her time working at JH Media’s corporate headquarters in New York City.

Now, don’t get me wrong: I have used this very space to sing Mr. Hook’s praises in the past. My respect for him as a self-made media mogul knows no bounds. And he has given me no reason to believe that he has anything but the best of intentions when it comes to my sister; Mr. Hook and Wendy are, I think, a coupling to which we all could aspire. But I can believe all of those things about him and still have reservations about some of the decisions he’s made re: the Chronicle, even in the short time he’s been at the helm, not the least of which being his decision to take the paper global. For a paper that has been about hyperlocal news since its inception, that sends up a big red flag.

And it is with great regret that I report that this article you are now reading will be the last of the John Darling editorials, such as they have been. And perhaps I don’t have quite as much integrity as my father, because I feel compelled to say that the cessation of this feature is in no way a choice that I have made; it is, rather, an edict that has come down from up on high. It is my sincerest hope that the demise of my longtime column is in no way connected with my vocal equivocation about the direction of the Chronicle under the new management (though, to Mr. Hook’s credit, he has allowed me to run this piece unedited, in its original form). I had hoped to one day be the top newsman myself here at the Chronicle, but I have in effect been demoted from assistant to the editor-in-chief to merely a staff writer. As of this moment, I do not know the type of content I will be expected to produce under the new regime. I would love it if my instincts about all of this were wrong; but they so very rarely are.

Dear readers, I cannot thank you enough for your unwavering support over lo these many years. And I am not going anywhere! Not yet. The Kensington Chronicle as we knew it may be dead, replaced instead by the K-Chron, but some things never change. As long as I’m here, you, the people of Neverland, will have a voice. And don’t hesitate to tell me on Twitter what you think of this new direction in the days and weeks to come. The Kensington Chronicle has always been a paper of and for the people; and if I have anything to say about it, the same will hold true for the K-Chron.