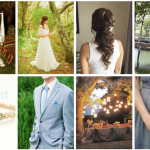 Will You Marry Me…Right Now? Last Friday night, while the rest us were wondering why we don’t have a better social life, the most romantic thing ever was happening across town. In the woods outside his new house, Wesley Parsons proposed to Juliet Carpenter. According to some local fairies, this was only the beginning of a magical night. The moment Julie said said yes, a select group of family and friends popped out of the bushes (why are there always bushes whenever anything romantic happens in this town?). The groom and the group put on a surprise wedding for the pair complete with full wedding regalia, a delicious feast, and an intimate reception.

They’re Not Gonna Take It. Neverlandians across town are seething about the recent changes at the K-Chron. In a bold move, Jas Hook fired advice columnist and ex-fiance Wendy Darling, assistant to the editor John Darling, and whatever-she-was-this-week Lily Bagha, a close friend to the Darling family. CEO Jas Hook explained that what happened was not at all personal but a purely business decision.  He explained, “The K-Chron needs to go in a new direction and the Darlings are holding it back.” This hasn’t stopped the rallying cry of “Save the Darlings!” from taking the streets and shops of Neverland. The Neverland Wish Granters even changed their grand opening on Friday to a #SavetheDarlings Solidarity Party.

Ferris Approved. Neverlandians turned out last Wednesday for an 80’s themed bash celebrating Enya Rose’s birthday. Teresa decorated local pizza joint Shakey’s with posters of famous 80’s movies and lots and lots of neon. Leg warmers, parachute pants and tutus all made a comeback and the night ended with a screening of the classic John Hughes film “The Breakfast Club.”  In case you didn’t get enough partying in, just a reminder that Agent Taco’s Bachelor Party is happening this Friday at 7PM! Don’t think it’s 80’s themed, but I’m sure Mr. Bueller would still be on board.

Play It Again, John. John Darling isn’t letting unemployment get him down. After reading a pile of awesome submissions, the once-editor-in-waiting has chosen to produce “The Wedding Crashers” by Teresa Delacruz and Gemma Willoe. Casting will take place this week. If you’re interested in auditioning, tweet to @JNDarling indicating which character you’d like to play, with the hashtag #NeverlandAuditions, and then present a monologue of your choosing. See below for details on the characters! Please submit your monologue no later than 11 p.m. this Thursday, 4/13. The show will take place this Saturday, April 15th, at 6PM Eastern followed by an after party of epic proportions. This is one Neverland event you do not want to miss!

Pandora – our brave heroine, in love with Westley, she must fight for her love
Westley – ruggedly handsome, in love with Pandora, but duped by Jasmine
Jasmine – the villain, that vile witch which keeps these lovers apart
Bear Moon – the man in the moon, who shines the truth on deception
Tiger – anyone who is willing to dress up in a tiger costume
Clergyman – this is self-explanatory

Best Tweet Ever
Gina Retweeted
JenAshleyWright @JenAshleyWright 21 Jan 2015
More
Every time you get dressed remember that, if you die, that’s your ghost outfit forever. 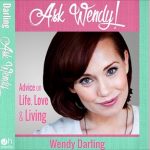 Neverspear In Love. This is why we love being Neverlandians! Everyone in town turned out to support Peter Pan in his artistic pursuit this past Thursday. Auditions took place on Wednesday, and with only a day’s notice actors took the stage the next night. John Darling, Michael Darling, G. Harrison Lestrade, Teresa Delacruz and Rowan O’Connor joined the cast along with Mr. Pan while Elsa Fairy, Lorelie Williams, Fish Girl Pond and yours truly helped bring the production together. Everyone celebrated a job well done with a toast at the Jolly Roger after the show.

Book It! In case you haven’t heard, Neverland’s own Wendy Darling is starting her book tour here in town at Neverland Books this Saturday at 1:30PM EST. So grab some brunch and come get in line for your very own signed copy of her book Ask Wendy! Advice on Life, Love & Living. If you can’t wait until Saturday, check out excerpts from the book at jhmediaworld.com.

Horse Play. Apparently, horses are the new black. This week saw two surprising horse cameos. After Mia decided to stay in Neverland, we all thought things had calmed down for the book store maven. That is until Eli Traynor rode up to her front door on a noble steed and made the maven into a maiden. In Panlet, the Ghost of Pancules played by G. Harrison Lestrade rode in on a horse as well. This mount was provided by Lorelie Williams who generously stayed behind to help shovel manure after the show.

Partners in Crime. It seems an unlikely duo has formed in the fight against crime. Barely a week into taking the position of Deputy Sheriff of Neverland, G. Harrison Lestrade has unofficially teamed up with Cleveland-based Slayer Teresa Delacruz to take on the forces of evil. Mr. Lestrade has been making quick work of the petty criminals in town, but has turned to the supernatural expertise of Ms. Delacruz when things skew to the spooky. Rumor has it the Neverland County Sheriff Office may be opening a paranormal investigation unit.

Engaging Affairs. Sarah Jane-Lakewood has announced that her engagement party will be taking place on August 28th. If trends continue it should be quite the romantic affair. As the summer is drawing to a close, it seems almost everyone in Neverland has paired off. First of all, I would like to assure all of those as single as me that those couples can’t sing “Single Ladies”. Second of all, I would really like to collect a comprehensive list of couple nicknames…Go! 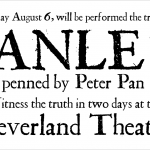 Hearty Party. Everyone had a great time at the Jolly Roger Soda Ship 100 year Anniversary Party. Aimee and Katie served up an endless supply of delicious sweets and treats. Throughout the day patrons answered trivia about the shop’s history in between socializing and listening to a set by Fish Girl Pond. Neverlandians in attendance included Wesley Parsons, Juliet Carpenter, G. Harrison Lestrade, Bri Valdivia, Mia Rivers, Nanny Ams, Teresa Delacruz, and many more.

Whiplash Woman! A few days ago, Neverlandians were tearfully bidding goodbye to one of their own. Word on the street was that Mia Rivers would be moving to Denver to work as a paralegal. She was even spotted having an intense conversation at the Jolly Roger with one Eli Traynor. Perhaps seeing how much her would-be suitor cares made her change her mind because just as everyone had gotten used to the idea of her leaving, she changed her mind!

Bromances and Sisterhoods. While G. Harrison Lestrade and Wesley Parsons have moved into a bachelor pad of their very own, the ladies of Neverland could be heard far and wide having another Karaoke Party. Everyone was happy to celebrate Mia’s decision to stay in Neverland. Even new-mom Jo Wentworth made an appearance with her little baby Lilian.

Play Time! You’ve heard the whispers, and we at the Chronicle can assure you that it’s true. Peter Pan’s Performance Pieces (P4) will be having a live performance this very week. Peter Pan’s “Panlet” debuts at the Neverland Theatre this Thursday at 9pm EST, August 6th.  It may even feature some of you, valued readers (and future stars!)  Look below for more info…

Auditions will be held tomorrow, Wednesday 8/5.  If interested, please contact Peter Pan on Twitter (@PetersPanels) and indicate which character you want to try out for.  No sides at the audition, simply prepare a monologue of your choosing.  Scripts will be distributed after final casting decisions have been made.

Ghost of King Pancules – The former King of Nevermore, slain by his duplicitous brother, Jas Vader.  The spirit of Pancules appears to his son, Panlet, in hopes that he will be avenged.

Queen Gwendolyn – King Pancules’ widow.  Not complicit in her late husband’s murder.  In danger of succumbing to her brother-in-law, Jas Vader’s, romantic advances.

Jas Vader – Brother to King Pancules, perpetrator of murder most foul.  Usurper of the throne, and a contender for Queen Gwendolyn’s heart.